©
Naples is the capital of the Italian region Campania and the third-largest municipality in Italy after Rome and Milan. We've included these beaches for you: Fornillo and Villa di Pollio Felice - Bagni della Regina Giovanna. Head to Ceramica Assunta and Nuvola, idee che volanofor plenty of shopping. Get out of town with these interesting Naples side-trips: Chalet de Mar (in Minori), Villa dei Misteri (in Pompeii) and La Bottega delle Arti (in Ravello). There's more to do: steep yourself in history at Pompeii Archaeological Park and look for gifts at Face Shop.

To see ratings, where to stay, other places to visit, and more tourist information, read our Naples trip planning site.

Things to do in Naples 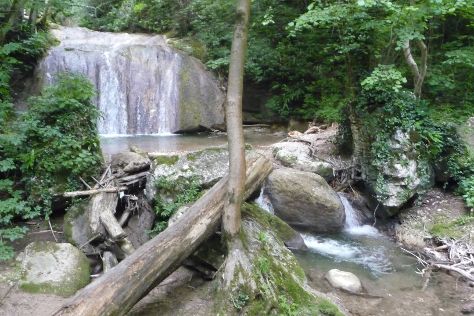 Start off your visit on the 12th (Tue): see the grandeur of opera at Arena di Verona, then steep yourself in history at Museo di Castelvecchio, then take in the spiritual surroundings of Basilica di San Zeno Maggiore, and finally admire the sheer force of Parco Naturalistico delle Cascate-Family. On the 13th (Wed), you'll have a packed day of sightseeing: take in nature's colorful creations at Giardino Giusti and then get in on the family fun at Boscopark Parco Avventura.

Getting from Naples to Verona by flight takes about 3.5 hours. Other options: take a train; or drive. July in Verona sees daily highs of 36°C and lows of 22°C at night. Cap off your sightseeing on the 13th (Wed) early enough to catch the bus to Venice.
more less

Do some cultural sightseeing at Piazza San Marco and Museo Correr. Museum-lovers will get to explore Doge's Palace and San Marco 801. Next up on the itinerary: explore the activities along Canal Grande, look for gifts at Peterpan Masks, admire the masterpieces at Peggy Guggenheim Collection, and admire the striking features of Basilica di San Marco.

To see other places to visit, reviews, traveler tips, and other tourist information, read our Venice online tour planner.

Take a bus from Verona to Venice in 1.5 hours. Alternatively, you can drive; or take a shuttle. In July in Venice, expect temperatures between 36°C during the day and 22°C at night. Finish your sightseeing early on the 16th (Sat) to allow enough time to take a train to Florence.
more less

For shopping fun, head to Davide Cerasi Leather Boutique or Leonardo Shoes. Academy Of Florence Art Gallery and Pitti Palace will appeal to museum buffs. And it doesn't end there: take in the spiritual surroundings of Cathedral of Santa Maria del Fiore, admire the striking features of The Baptistery of St. John, explore the world behind art at Gallerie Degli Uffizi, and don't miss a visit to Piazzale Michelangelo.

Plan trip to Florence with our itinerary maker to find out where to go and what to do.

Take a train from Venice to Florence in 2.5 hours. Alternatively, you can drive; or take a bus. In July in Florence, expect temperatures between 35°C during the day and 21°C at night. Finish your sightseeing early on the 20th (Wed) so you can take a train to Rome.
more less

On the 21st (Thu), delve into the distant past at Pantheon, look for gifts at Grezzo Raw Chocolate, then steep yourself in history at St. Peter's Basilica, then delve into the distant past at Palatine Hill, and finally make a trip to Trevi Fountain. On the 22nd (Fri), you'll have a packed day of sightseeing: stop by Antica Caciara Trasteverina, then explore the ancient world of Colosseum, then admire the natural beauty at Villa d'Este, and finally buy something for everyone on your list at Centro Commerciale RomaEst.

For ratings, maps, traveler tips, and other tourist information, go to the Rome trip planner.

Getting from Florence to Rome by train takes about 2 hours. Other options: drive; or fly. In July in Rome, expect temperatures between 37°C during the day and 24°C at night. Cap off your sightseeing on the 22nd (Fri) early enough to go by car to Assisi.
more less

Rich in culture and religious tradition, Assisi is known as the birthplace of St.

To see ratings, other places to visit, reviews, and other tourist information, go to the Assisi trip itinerary builder website.

You can drive from Rome to Assisi in 2.5 hours. Other options are to take a train; or take a bus. Traveling from Rome in July, plan for a bit cooler nights in Assisi, with lows around 20°C. Finish up your sightseeing early on the 24th (Sun) so you can travel back home.
more less

Things to do in Assisi