Step off the beaten path and head to The Live Thriller and Musee de Montmartre. Explore Paris' surroundings by going to La laiterie de propreté (in Versailles), Koezio (in Lieusaint) and Hotel Groslot (in Orleans). There's much more to do: admire the striking features of Le Palais Royal, stroll around Parc du Champ de Mars, ponder the world of politics at Hotel de Ville, and take an in-depth tour of Memorial De La Shoah.

Plan my Paris trip by asking Inpirock to come up with tips and suggestions.

If you are flying in from Thailand, the closest major aiports are Paris-Orly Airport, Charles de Gaulle International Airport and Paris Beauvais Tillé Airport. In October, plan for daily highs up to 19°C, and evening lows to 10°C. Finish your sightseeing early on the 22nd (Thu) to allow enough time to drive to Cergy.
more less

©
Cergy is a commune in the northwestern suburbs of Paris, France. You'll discover tucked-away gems like Avion Normandie - L'Eure de l'Ulm and Plan d'Eau du Canada. Explore Cergy's surroundings by going to Le Vieux Moulin de Vernon (in Vernon) and Eglise Saint Etienne (in Beauvais). There's more to do: make a trip to Axe-Majeur Cergy-Pontoise and get in on the family fun at Ile de Loisirs de Cergy-Pontoise.

To see ratings, traveler tips, where to stay, and other tourist information, you can read our Cergy visit planner.

Traveling by car from Paris to Cergy takes an hour. Alternatively, you can take a train; or take a bus. In October, daily temperatures in Cergy can reach 20°C, while at night they dip to 11°C. Wrap up your sightseeing on the 25th (Sun) early enough to drive to Meaux.
more less

Things to do in Cergy 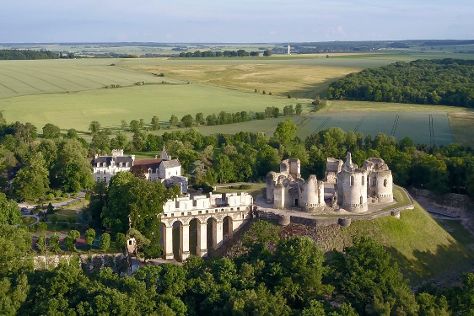 ©
Meaux is a commune in the Seine-et-Marne department in the Île-de-France region in the metropolitan area of Paris, France. Step off the beaten path and head to Chateau de Fere-en-Tardenois and Champagne Dom Caudron. Get out of town with these interesting Meaux side-trips: Fere-en-Tardenois (Halle aux Bles & Oise-Aisne American Cemetery and Memorial) and Maison de l'Amitie France Amerique (in Chateau-Thierry). There's lots more to do: identify plant and animal life at Parc Naturel du Patis, look for gifts at La Petite Lucarne, examine the collection at Musee Bossuet, and sample the tasty concoctions at Brasserie de Meaux.

To find ratings, other places to visit, more things to do, and other tourist information, you can read our Meaux road trip planning tool.

Traveling by car from Cergy to Meaux takes an hour. Alternatively, you can take a bus; or take a train. October in Meaux sees daily highs of 19°C and lows of 11°C at night. Finish your sightseeing early on the 29th (Thu) to allow enough time to drive to Paris.
more less

Things to do in Meaux

Step off the beaten path and head to 1st Arrondissement and Chartres Historic Preservation Area. You'll find plenty of places to visit near Paris: Chateau de Maintenon (in Maintenon), Arboretum de la Vallee-aux-Loups (in Chatenay-Malabry) and Briare aqueduct Pont-canal de Briare (in Briare). Enjoy Paris some more: examine the collection at Musee du Parfum - Fragonard, get your game on at Wildness, take in the architecture and atmosphere at Église Saint-Étienne-du-Mont, and make a trip to La laiterie de propreté.

You can drive from Meaux to Paris in an hour. Alternatively, you can take a train; or take a bus. On the 6th (Fri), wrap the sightseeing up by early afternoon so you can travel back home.
more less